Shirley Howell, a 47-year-old mother of one, had her life turned upside down following a stroke in 2007 at the age of 35.

An independent and active young woman who enjoyed swimming and running, Shirley was left with reduced mobility and strength in her right leg, loss of function in her right arm, reduced endurance and fitness, communication impairments, and reduced postural control and spatial awareness.

Prior to the stroke, Shirley owned her own website design business and worked three days a week at HBF – a job she maintained even when her website business was booming as she loved socialising with her colleagues. She also spoke five languages fluently, including Malaysian, Cantonese, English, Japanese and Mandarin.

“Since my stroke, it’s really hard to understand what’s going on,” Shirley said.

Shirley’s disabilities made day-to-day activities, such as cooking, washing the dishes, cleaning, and brushing her hair, extremely difficult. It has also made accessing the community much more difficult, especially for activities that require walking long distances or social activities.

Since joining Rocky Bay in 2017 to receive physiotherapy, occupational therapy and neurological rehabilitation services, Shirley has continued to make progress in her recovery and is smashing her goals.

Shirley attends Rocky Bay’s Clarkson and Duncraig Hubs and accesses the hydrotherapy pool and therapy gym at the Mosman Park headquarters, where she undertakes gait retraining and therapy to improve her lower leg strength and dynamic balance to help reduce the likelihood of falls.

“Her biggest achievement was just standing up,” Shirley’s husband Eric said. “To get as far as she has is pretty fantastic.”

Living at home with her husband Eric and four-year-old son Brian, Shirley has been focused on increasing her access and participation at home and in the community, so she can get back to doing more of what she was able to before the stroke.

Rocky Bay Physiotherapist, Rebecca Archibald, said Shirley had progressed through her post-stroke neurological rehabilitation extremely well and had achieved many of the goals she had set herself over the years.

“Shirley can now independently get in and out of the shower, climb more than two steps, put on and remove her knee-ankle-foot brace, and get off the floor with minor assistance,” Ms Archibald said.

“By using the hydrotherapy pool, Shirley has improved her water safety skills and increased her confidence to the point she is now able to swim four laps of the pool independently while supervised.

“While Shirley still has some cognitive issues which affect speech, she is now able to walk and is swimming to keep up her fitness which is fantastic.”

Shirley’s current goals include improving her endurance and strength to water her garden by hand, be able to get on and off the floor independently, and improve her endurance when walking in the community.

Shirley was transferred to the National Disability Insurance Scheme (NDIS) in March 2019 and now has access to greater funding support, which the family says had made a huge difference in their lives.

The NDIS funding means Shirley is now able to access Rocky Bay’s occupational team to undertake an assessment of the modifications which are required to make moving around the family home easier.

Click here for information on Rocky Bay’s neurological rehabilitation and therapy services, or call our friendly Customer Engagement team on 6282 1900.

“Her biggest achievement was just standing up, to get as far as she has is pretty fantastic.” 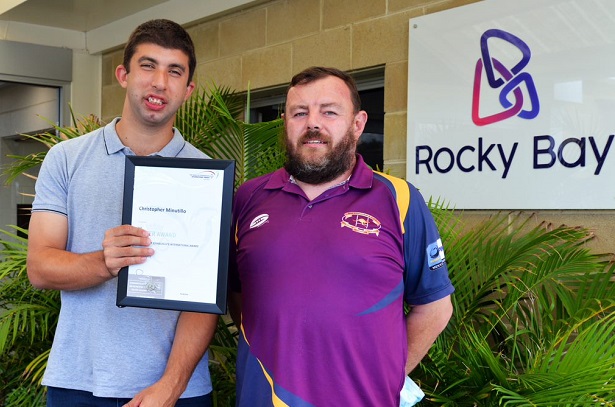