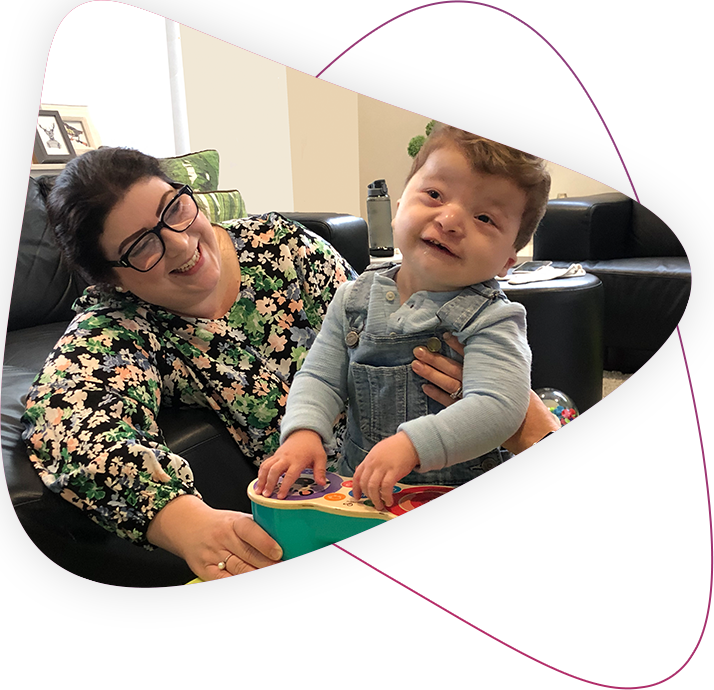 Henry Duca, a bright and happy two-year-old, has had a challenging start to his life.

Since birth, Henry has endured seven different surgeries in relation to his diagnoses.

Henry was diagnosed with Pierre Robin Sequence (PRS) primarily affecting the formation of his jaw and palate, Tetralogy of Fallot (ToF), which is a congenital heart condition, Obstructive Sleep Apnoea, and dysphagia, resulting in difficulties with breathing and swallowing.

Henry was also diagnosed with a hearing impairment, for which he uses a bone conduction device for conductive hearing loss, with Leanne and Simon looking to explore a cochlear implant for Henry in the future if his hearing loss is permanent.

Henry’s most recent surgery was in April this year, which consisted of reducing the size of his tonsils, Botox to his salivary glands, and a lip tie release to assist with his speaking, feeding and his obstructive breathing.

Rocky Bay’s Allied Health Team Leader, Nelly Sarwary, advised and advocated for a review with his Paediatrician as well as a referral to be seen by an Ear, Nose and Throat (ENT) Surgeon.

Henry is the second participant in Rocky Bay’s Early Start Intervention Program (ESIP), which launched in January this year, and was made possible with the generous support of the Channel 7 Telethon Trust.

The program brings critical and timely intensive multi-disciplinary therapy support to West Australian children with significant developmental delay and who are at risk of, or diagnosed with, rare diseases.

“As soon as we got on board with Rocky Bay, there were things that were picked up with him…,” Leanne said.

“Mostly with his mouth – the lip ties, tongue tie, extra-large glands in his mouth that were potentially impacting him.”

When he was nine weeks old, Henry had jaw distraction surgery to insert metal distractors to lengthen his jaw. Henry also had his Cleft Palate repaired (a consequence of PRS), another surgery to insert a Percutaneous Endoscopic Gastronomy (PEG) for feeding in relation to his dysphagia, and at six months old he had open heart surgery to repair his ToF.

“Some kids with PRS have to have the jaw surgery, and some don’t,” Leanne said.

“Henry’s was quite severe. What it did was almost immediately allow him to breathe almost on his own, as from birth he had relied on a Nasopharyngeal Airway (NPA) and being cared for lying face down.

“Every procedure he’s had there have been complications. Nothing has ever gone straight forward and it’s generally related to his airways, so we’ve always had extended stays in the hospital.”

Leanne heard about Rocky Bay’s ESIP through Perth Children’s Hospital (PCH) and Henry has one of 24 spots in the program allocated to high-risk children.

“Henry’s OT at PCH rang us straight away to tell us it would be a really good program for him. She did the referral and that’s how we got involved,” Leanne said.

After being referred to Rocky Bay, the Duca family had an initial meeting with ESIP Coordinator, Cristina Lee, who assessed Henry to see what services he should be accessing.

“When participants come into our program we have an initial meeting, and together we complete a brainstorm with the family to ensure a holistic understanding of the child’s routines and family life,” Cristina said.

“This includes sleep, mealtime, communication, mobility, self-care activities like dressing and showering. We also look at community supports and networks the family currently have, and discuss a goal setting process with all of the kids as well.”

In addition to PCH, children have been referred to the program from private practices, child development services and by word of mouth.

“I shared Rocky Bay program with one of my NICU friends, and they are now on board with their child as well,” Leanne said.

With Rocky Bay, Henry now accesses physiotherapy, occupational and speech therapy. The best part for the Duca family is that Henry can receive intervention in the comfort of his own home, affording him a positive environment for progress.

“It’s great, as it can become quite overwhelming when you’re constantly driving in and out of hospitals as well,” Leanne said.

Henry has three goals associated with his individual therapies, including being able to cruise along surfaces with minimal assistance so he can independently move and interact with his cousins, intentionally communicate and make requests using a multimodal approach to communication (Key Word Sign and Augmentative and Alternative Communication AAC) and finally to be able to play shopping activities alongside his cousins with adult support.

“Henry is doing amazing. He’s doing so well in the program and has made so many gains already,” Cristina said.

“His goal now is to independently mobilise. At the moment Henry doesn’t really have any form of mobility, so we’re working on crawling and standing, and he’s now starting to be able to stand with minimal support and supervision.

“Improving a child’s function within daily routines based on individualised goals and family centred practice are the principles of our program, and making sure that everything is meaningful and that the intervention we put in place is in the home.”

Leanne said that so far Henry has made much progress in such a short period of time.

“Just how he’s interacting, his level of engagement, physically how much more he is trying to do in terms of his movement and mobility,” Leanne said.

“And the way he is expressing things, we’ve found he has got more of an understanding of tone and the emotion that he is trying to put forward.

“I feel this is all really because the approach with Rocky Bay is so structured and individualised to him. We have goals set, and planning in place.”

Henry is learning Key Word Sign with his speech pathologist and is learning to use switch toys, which are engaging to play with, to follow instructions and make commands with. Henry’s switch toy was developed by the Rocky Bay Equipment team and consists of a large button connected to a toy dinosaur that Henry can press to make the dinosaur walk and make noise.

Henry also accesses group hydrotherapy along with other children in the ESIP at Rocky Bay’s Mosman Park hub.

“He really does do well with that. He loves the water as well so it’s very positive for him. He makes the links between ‘this is going to be fun, but it’s also working me.’”

Reflecting on the family’s experience so far, Leanne said it was to their advantage that she has a background in nursing.

“I really feel like a lot of the things we have achieved are assisted by me being a nurse, as I can perhaps advocate more for him from a medical perspective,” Leanne said.

“I think if you don’t have that background, it can be incredibly challenging for families…I don’t know how some other families cope…navigating the system when you have a child with complex needs can be very tough.”

Overall the Duca family are thrilled with the services that Henry has been able to access via Rocky Bay’s Early Start Intervention Program.

“We’re stoked. He needs therapists that are quite firm, he needs the structure….and someone that picks up on his little ques and quirks,” Leanne said.

“Henry is very determined, and he is very affectionate – he’s the best cuddle giver,” said Leanne.

“For what he’s been through, he’s always so happy.”

For what he’s been through, he’s always so happy. Max Lockyer is embarking on an exciting time in his...